You will have received an update from me (via email) with regards to the physical reopening of schools. I hope that the letter is as clear as it can be at the moment.
With regards to Wellesley Online, I continue to be inspired by the broad range of work and activities that our pupils are undertaking and achieving during this period of lockdown and without doubt, the highlight of my week is spending time with different groups of pupils in live google meet sessions. Their enthusiasm and optimism is just one of the reasons why my staff and I chose to go into a career in education. I hope that you all have a great week and we wish all families a happy and healthy half term. Mrs Spencer was delighted to receive two family vocal contributions last week in the virtual choir. A huge well done to the Beckett family and the Sarafoglou family, who all entered fully into the Spirit of Wellesley and got stuck in with this activity. Thank you and we hope you enjoyed the singing.

Thank you for all of the brilliant pictures and videos. It’s great to see so many of you outside, active and having fun. Whilst the weather is fine, families, why not have a go at the Matching Pairs Races. This week, watch out for new challenges, Garden Races, Target Practice and The Wellesley Workout.  Watch out for the lava! The JB and JH students were set the task to create a colour wheel inspired by the work of Tony Cragg. I was very impressed by the enthusiasm the children put into this project, the images are just a small sample of the excellent work I received. I have set a whole school Andy Goldsworthy inspired project this week and look forward to seeing what the pupils come up with. Mr Parfitt.

Block 4 last week were studying Alfred the Great and Athelstan. There task was to come up with a debate between the two as to who was the greater King. Here are some of the results. Click here to watch.

Madame Laurans really loved receiving your pictures of your own try at the “Croque-Madame-Laurans” in Cooking. These look lush! Join us every Friday for a new recipe. This week will be making half term’s sunny drinks. JH and JL pupils were sent some French singing by Mr Latteur accompanied by a backing track. Here are just a couple of the results.

This week’s ‘Team of the Week’ is JH for all of their superb efforts. They will meet with Miss Hopkin and Mr Franklin during Tuesday break time. Well done, JH. 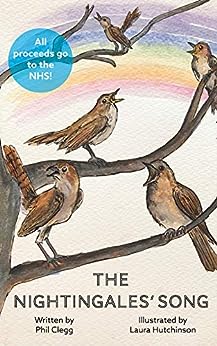 The Head of Bradfield Sixth Form: Phil Clegg, and Old Bradfieldian: Laura Hutchinson, have written a charming illustrated children’s ebook featuring global sporting superstars:
· Jordan Henderson, Jack Wilshere and Danny Welbeck from football
· Joe Root, Mark Wood and Danni Wyatt from cricket and
· George Kruis, Tom Curry and Anthony Watson from rugby.
As the book is written for children aged 4-9, we thought you would like to know about it and hopefully promote it to your pupils and parents given it is for a wonderful cause.
The ebook launched on Amazon this week and only costs £3.99
100% of the proceeds are going to the NHS.
https://www.amazon.co.uk/Nightingales-Song-Phil-Clegg-ebook/dp/B088C414TQ

This week is Mental Health Awareness Week. Children and staff really enjoyed taking part in our Time to Talk day we held back in February, please click here for some resources which you may find useful. The theme for this year’s day is kindness – which is one of our Wellesley Values, so here’s how you can get involved. During next week, we would like you to carry out or reflect upon an act of kindness. Please take a photo or video (with permission) and send them in to Mr Martin, who will be able to share them in subsequent Wellesley Weekly bulletins. I can’t wait to see all your amazing examples of kindness and don’t forget to look out for a very special recipe from Ms Moosuddee!

As we cannot see you in person at the moment, we want you to be aware of much of the fun activity that is taking place within our community. A snapshot of this is communicated through our social media channels facebook, twitter and instagram. Do please follow us and share these links with your families should you wish and we hope that you enjoy some of the footage and information!

The school uniform supplier, Billings and Edmonds is currently offering the following promotions:
10% discount on all online orders placed before 30th June 2020.
5% discount on all online orders placed during July 2020.
Items can be returned (for a refund or exchange) for a period of 6 months after the purchase date (please refer to their website for full Ts and Cs).
For a limited period only, free delivery to a UK address is offered.
If you are planning to visit the Chiswick store (please note this is the only branch to stock Wellesley House uniform), an online appointment system is being launched later this month. You must make an appointment prior to visiting and please click here to book or contact the store on 020 8742 0201. For further details, please visit their website.

Parents with children in Year 4 upwards may be interested in accessing the following virtual Senior School Open Mornings:

Tonbridge is offering virtual tours with online Meet the Headmaster sessions where you will hear from Mr James Priory and have the opportunity to ask questions. Please visit their website for booking information.

Please visit the appropriate website and ensure you book in advance to avoid disappointment.